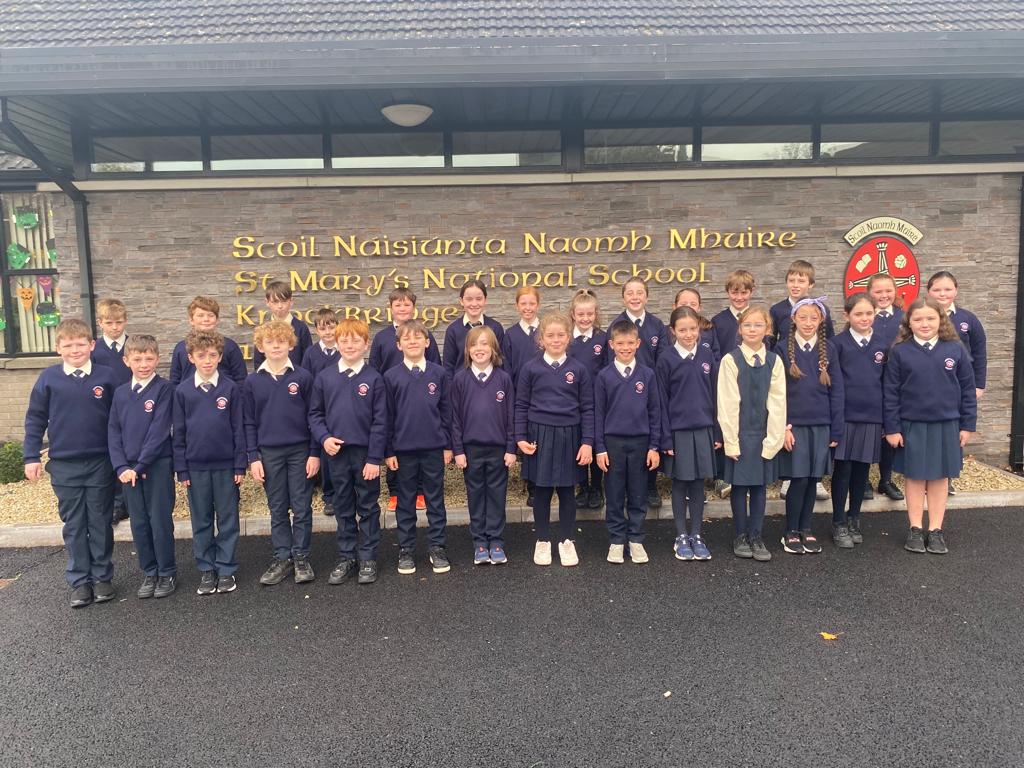 Seren: 5th class is going great so far! We’ve only started the year and we have done so many cool and fun things.

First we learned about Diarmuid and Gráinne, it was really interesting. We watched a video, then wrote a story and drew some illustrations of it.

Then we did work about Mexico; Aztecs, ‘How to Make Guacamole’ – and we even got to make it, it was delicious!

Seren: We also do a lot of art and it’s really fun and interesting to do. We’re doing skeletons for Halloween and they are really funny and spooky!
Ryan: The best bits of art so far are the spooky scenes, the haunted house and the skeletons in my opinion.

Sophie: In Religion we made ‘prayer rocks’, we got to paint them and design them. I painted mine purple and I sprinkled silver glitter on it.

We also did Student Council elections. Oisín Byrne and Emily Duff won the elections. There was a really exciting part when Oisín and Zac had a tie so we had to host a tie breaker!

Daniel: When we were on the laptops, we wrote limericks on Story Jumper. There was a Halloween one, and a normal one. The Book Fair was on a well, and I bought one book: Alex Rider.

Iveagh: We did buddy reading with Ms Matthews class, it was so fun to hang out with 1st class. We made board games to play with them for Maths Week. We’ve had Lunchtime League, and also Art Club, Homework Club and Gaelic after school, and they are all so fun to play.

Ryan: About two weeks into the year, Gaelic after school started. After 1 week of training they split us into provinces: Ulster, Munster, Leinster and Connaught.

Emily D: We have had the school football team – we made it to the final but unfortunately we lost. We have had the lunchtime league, and the teams are Red, Blue, Yellow and Green.

To name but a few of the things we’ve done! I hope everyone has a wonderful mid-term break and returns to school refreshed for all that is in store in the run up to Christmas!